Danish Agro met a number of structural and financial targets in an otherwise challenging year, impacted by the effects of the drought in 2018, a great deal of competition and non-recurring costs. In 2019, the Danish Agro group achieved its highest turnover so far of EUR 4.7 billion, a 7% increase compared to 2018. This was despite generally falling product prices and a lack of turnover from acquired Baltic machinery activities which, contrary to expectations, did not get approval from competition authorities in 2019. Also the group’s operating income (EBITDA) was at a satisfactory level of EUR 141 million, an EUR 7 million increase compared to 2018.

“2019 has been a challenging year where we have been facing pressure from many fronts, and it is therefore that I am very satisfied with the very decent levels of activity and operating income that we have achieved. The customers are coming to us and we are gaining market shares, and this is a good basis for the years ahead,” says Henning Haahr, Group CEO of the Danish Agro group.

The earnings before tax (EBT) amounted to EUR 54 million, which is EUR 6 million lower than last year.

“We are, of course, not completely happy with earnings before tax of EUR 54 million, and we have to note that we have been hit by a number of isolated events in 2019. Besides a great deal of pressure from competitors in 2019, the impact of the drought in 2018 has significantly influenced our ability to generate earnings in the past year. Finally, our earnings have been influenced by very low yields from the group’s shares in Agravis, a German agribusiness group. In connection with the end of a year-long trial in Germany, Agravis was hit by extraordinary costs which impacted their earnings in 2019,” says Henning Haahr. 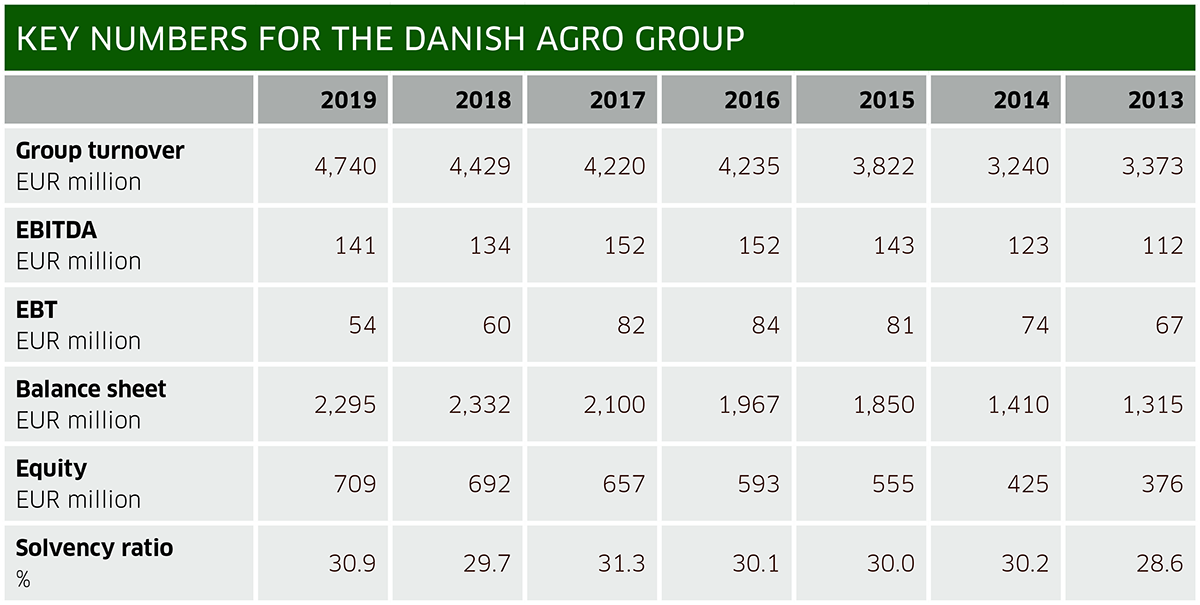 Via a strong focus on managing tied-up capital, the total balance sheet has been reduced from EUR 2,332 million to EUR 2,295 million, which has been achieved despite a growth in turnover of 7%. At the same time, the net interest-bearing debt has been successfully reduced by approximately EUR 67 million, due to positive cash flows from operations and holding back with investments.

The group equity has increased by approximately EUR 16 million and amounted to EUR 709 million at the end of the year. This, compared with the smaller balance sheet, means that the solvency ratio has increased to 30.9% compared to 29.7% in 2018.

“It has been one of the major targets for the year to increase the group’s solvency ratio to well above 30%,” says Henning Haahr.

“There is no doubt that Danish Agro has faced challenges in 2019, where things has not come of its own accord. However, that is precisely why it is so positive that despite this, the group has managed to achieve the highest turnover yet and a very decent operating income. This demonstrates that more and more farmers are choosing Danish Agro, and we are starting the coming year on a sound foundation. This is very positive,” says Jørgen H. Mikkelsen.

In a stronger position
From a structural point of view, the Danish Agro group has strengthened its position in the past year. In Denmark, we have been focusing on increasing competences and knowledge in the organisation. Additional training of specialists has been conducted in the various product areas, and the employees’ competences have been increased via collaboration and development projects in the agricultural sector. In addition, Danish farmers have benefitted from strong, new services such as being able to order and receive plant protection products on the same day.

Internationally, we have consolidated our market position in the eight countries where we have agribusiness companies. Among other things, this was accomplished via our acquisition of agribusiness activities from UAB Robusta in Lithuania, which provides us with better facilities in northern Lithuania. What the eight markets have in common is that 2019 was generally a good year with favourable weather conditions and, as a result, a large and high-quality harvest. Our three Baltic agribusiness companies achieved a turnover of EUR 644 million, which is an increase of an impressive 30% compared to the year before.

In Germany, we have come a long way with Ceravis AG’s turnaround plan, and we are seeing major progress being made. The result for the year is significantly better than last year, but of course, also impacted by the drought-related challenges from the 2018 harvest.

The total turnover of the group’s agribusiness division (Denmark, International, and Support) amounted to EUR 3,773 million on the basis of a very decent 8% growth in 2019. The division achieved an operating income of EUR 96 million, which is a EUR 14 million prosperity compared to 2018, primarily due to our German agribusiness activities in Ceravis AG.

In 2019, the Danish Agro group also strengthened its position in the machinery market. In order to create the strongest sales and services setup for the Finnish farmers, it was decided in 2019 to integrate the newly founded company, Finnish Agro Machinery Oy in Hankkija Oy. This means that from 2020, Hankkija will begin to market, sell and service CLAAS in Finland and thus become a new and strong machinery setup with CLAAS as its primary brand. In Denmark, there was a generational handover in Mørkøv Maskinforretning A/S when Røstofte Maskiner A/S, which is owned by Danish Agro, acquired the business. The retailer structure in Denmark was further strengthened at the start of 2020 as Almas Agro A/S was integrated into Traktor & Høstspecialisten A/S.

In the Baltics, in 2019 we have been waiting for the competition authorities’ approval for the acquisition of the three Baltic machinery companies, AS Konekesko Eesti, SIA Konekesko Latvija and UAB Konekesko Lietuva. The final approval is expected at the start of 2020. With it being represented in seven countries, Danish Agro is the largest partner for CLAAS on an international level.

Overall, in 2019 the machinery division has grown with 11% to a turnover of EUR 523 million. It is particularly impressive to see this growth in a declining total market in a year that was affected by customer reluctance to invest after the 2018 drought.

Also, the Vilomix group strengthened its position in Denmark, as the vitamin and mineral factory in Lime on Djursland was expanded with a new production line with a capacity of 40,000 tonnes. Overall, the Special Feed activities has achieved a EUR 365 million turnover, which is a smaller decline related to lower commodity prices for both vitamins and amino acids. The operating income has been achieved by very decent EUR 27 million.

In Finland, DAVA Foods Finland signed an agreement to acquire the majority of shares in the Finnish egg packing company, Närpes Äggpackeri. The Foods division has had a good year - operating income was EUR 28 million, EUR 7 million higher than the year before, which both are due to eggs in DAVA Foods plus chickens and production of pigs in DanHatch.

Main targets for 2020
The Danish Agro group is setting ambitious financial targets for 2020. The current business is the primary focus, and here, according to Henning Haahr, as many synergies as possible must be extracted from the current activities so that the overall market position is strengthened.

“With a good harvest in 2019, we are in a good position on the market as 2020 begins. There is no doubt that the coming year will also be characterised by strong competition, and we must respond to this and continue to adapt our business. On a structural basis, we will be focusing on consolidation in our agribusiness and machinery activities,” he says.

“In addition, it is a long-term goal of the group to make our premix and vitamin activities into more of a global business. The focus for 2020 will therefore also be on analysing the potential for future growth on the international markets, including Asia,” says Henning Haahr and continues:

“For our food companies, the focus will be on integration and taking advantage of synergies in the current business, including the integration of acquired activities and on streamlining operations. In addition, DAVA Foods has outlined ambitious goals for sustainability, including halving the company’s food waste and a significant reduction of its energy consumption,” he says.

According to Group CEO Henning Haahr, the Danish Agro group aims to realise the following primary financial goals in 2020: